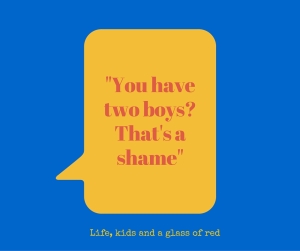 “You have two boys? That’s a shame”

Someone actually made that comment to me the other day when I mentioned to them that I have two boys. Seriously.

“That’s a shame”. Those words cut me.

Why is it a shame that I have two healthy, happy boys? Is it because I have two boys, and not a boy and a girl?

It seems this person feels that I’m missing out on a great parenting experience by having two boys. Like I’ve been dealt a crap hand and not gotten a girl out of the deal with the universe.

Yes, I realise that that by not having a daughter, there are some things that I won’t get to experience. I won’t get to go shopping with my daughter for her wedding dress. I won’t ever be told, “Mum, I’m pregnant!”.

But you know what? I’m a proud mum of two boys, and I wouldn’t have it any other way.

At the moment, when one of my boys farts, the other laughs like it is the most hilarious thing they’ve ever heard. In fact, our seven year old has actually fallen off his chair from laughing so hard at his younger brother’s fart before. He’s even taught the toddler the ‘pull my finger’ trick. Personally, I don’t get it, but it’s hard to not start laughing when they’re so caught up in the moment and in a fit of hysterical giggles.

I may never walk my daughter down the aisle on her wedding day, but I will make sure that the woman who marries my son will be marrying a gentleman. I will make sure I help raise a man to be proud of. A man who shows respect and kindness, and hopefully by then, he has stopped laughing at farts.

Thanks to living with three males, Star Wars has somehow been absorbed into my brain without any effort on my behalf. The other day I actually referred to our seven year old as “Padawan” without even realising it… But I’d much rather that than have Frozen on constant replay!

I won’t have to deal with anyone else’s PMS in the house each month. That’s probably a very good thing as I’m pretty awful to be around when I have PMS, so for my husband to be subjected to living with other scary, cranky women, that would just be hell.

Yes, my boys will fight with each other. I’m not naïve enough to think that they will live in a peaceful cohabitated state and share all of their possessions with each other without arguments. But when they do fight, it will be out of their system. No cattiness. Even now when they squabble over a particular toy car, or one of them ‘steals’ the cardboard tube that is doubling as a light sabre (there is no escape from Star Wars in this house), within five minutes, they’re back to being great friends, giving each other a hug and have completely forgotten about the incident that caused the squabble in the first place.

I have two healthy, happy, clever boys. Yes, they drive me to the brink of madness every now and then, but I wouldn’t have it any other way. They’re my boys, and I couldn’t be more proud. I’m actually not missing out on anything at all.

Do you have all boys or all girls?

Has it ever been implied to you that you’re somehow missing out too?

Make sure you’re following Life, kids and a glass of red on Facebook for extra giggles and snippets of silliness!

Linking up with Essentially Jess for #IBOT