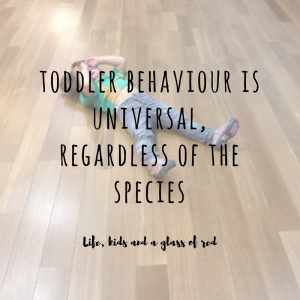 After a typically exasperating evening with the toddler, filled with delightful behaviour like throwing cutlery across the dinner table, narrowly missing his brother, I was fighting the urge to swear under my breath and roll my eyes.

And then I saw something that made me giggle, and realise we’re not the only one who deal with toddlers, and their delightful quirks.

On the quiet street outside our house, a young magpie, still fluffy and not yet gotten his adult feathers, lay on the road. At first glance, my husband and I thought the baby magpie had fallen out of a tree. Concerned, we peered through the window and tried to see if we could see the rest of the magpie’s family.

And then we realised, the magpie was just doing what toddlers do – being a noodle.

Now I don’t know about your toddler’s behaviour, but ours has a habit of suddenly lying on the floor and going limp like a wet noodle. Normally when we’re in a hurry in the shops and trying to go home. It is like he just suddenly has no bones and collapses on to the floor. It is then a battle to get him to stand back up and walk as he is extremely stubborn.

This is what the young magpie was doing. He was a toddler, and he was being a noodle.

The adult magpie appeared on the scene, stood next to the toddler magpie, and made some encouraging noises to him. I imagine it was something along the line of, “come on, Poppet. Get off the road. It isn’t safe to lie there. Let’s go back to the nest and have some worms”.

The toddler magpie lay there, then kind of stretched out, but went back to being a noodle. The adult magpie then, and I kid you not, with her beak, grabbed the toddler magpie by his wing and tried to pull him along and off the road.

At this stage, my husband and I were giggling, as we had been through a similar scene at the supermarket with our toddler.

In my mind, this is how the conversation between the magpies was going.
“Get off the road, it isn’t safe”
“No, I want stay here. It’s warm and comfy”.
“If you get up now and move, you can have an extra worm when we get back to the nest”
“No, I don’t want to move. I want to stay here”
“Come on, you have to move. That feral cat from up the road could come along at any minute”
“No.”
*Exasperated huffing from the parent magpie*
“Get off the road, now!”
“No”
“Argh! For crying out loud, get off the road!”

I sympathised with the parent magpie. The toddler magpie was being a bit of a turd, as toddlers sometimes are. I wonder if magpies use the counting to three trick.

A few minutes after this imagined dialogue between the two magpies, the toddler magpie eventually got up off the road, sulked a bit, and then ran around like a maniac on our front lawn, like nothing happened. Just like a human toddler would.

I made sure I found some snails in the garden for the adult magpies, and put them on the front lawn. The magpie equivalent of pouring a tired parent a glass of wine.

Does your toddler impersonate a wet noodle?
Have you seen toddler behaviour in animals?

Make sure you’re following Life, kids and a glass of red on Facebook for more giggles and snippets of silliness!